Behind, “CUT HERE” Part One.

First posts are always difficult. It’s like trying to introduce yourself at a party. First impressions can be so crippling, especially when everyone you know has a blog, and they’re all awful, navel-gazing trainwrecks (both the blog and the bloggers). Unfortunately, this is no exception. I’ll tell you from the start that this is going to be one hell of a navel-gazing trainwreck, so hit that back button right now. You’ve been warned. Unless you’re a masochist. In which case, carry on reading this blog. It may feed into your pain-seeking thrills.

The concept of “CUT HERE,” all began with a dream I had in the summer of 2008. It wasn’t really a dream, but more of a nightmare. It was Christmas time in Catania, Sicily and a girl sees a book on display at a bookstore kiosk entitled CUT HERE. The book’s cover had a bloody line across a faceless person’s neck, bleeding the title. Shortly after, sounds of sirens invade the dream, and as the girl rushes to the sounds, she sees a trail of blood on the asphalt and a mink coat on the ground. Everything is red. 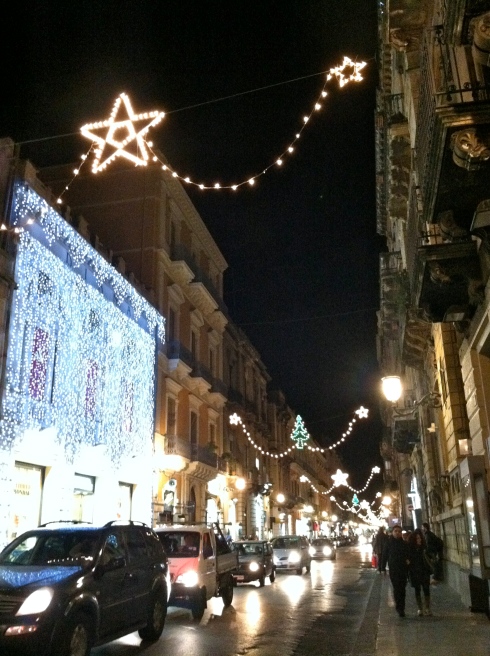 Flash forward to me seeing the same girl again, but this time she’s in a bookstore, holding a copy of the book, CUT HERE, waiting for it to be autographed by a Japanese author. But the girl is in danger, and so she runs away. I soon wake up with a sense of dread. I usually don’t write down my dreams often, but that time I wrote down that dream cause it left me with a haunting feeling. At the time I didn’t know if I’d ever use that dream for a short story, poem, or novel. It sat there gathering virtual dust on my computer for three years before I decided to re-read that dream, one night in Janury of 2011. Soon, that dream would become Lena Martin’s tortured past.

Being a huge music addict, I don’t know if the title of the book that the students of St. Lucy Academy are obsessed over, came to me because of the infamous Cure song by that title, or because of a shirt I saw long ago that had a scissor pattern along the neck with the same words, whatever the case, enjoy the song below, as that may make you feel as though you didn’t entirely waste your time by venturing into the depths of this blog.

Keep your eyes peeled, CUT HERE will be unleashed upon the world on February 13, 2015 (I couldn’t pass up the opportunity to have the book launch on Friday the 13th. There will also be a blog tour starting the 16th of February, but more on that when the time comes.

As an ending note, just remember aspiring writers, inspiration can come from anything. Just because you don’t use something right away doesn’t mean that you can’t eventually use it for a project. My nightmare was stashed away for three years before it became the protagonist’s backstory. So never underestimate the worth of something just because it doesn’t click right away with an idea. File it away, and eventually it can be used for something.

As for what I wish to accomplish with this blog? The short answer is, take you behind the scenes of the development of, “CUT HERE,” which will include how Dario Argento was a prime inspiration, Clive Barker’s Dread, Ryan Donowho, and Smashing Pumpkin’s ‘Today,’ all fell into a melting pot of thriving ideas to help forge a novel that is dark, and a little twisted. Stay tuned.

Born in Catania, Sicily, she has led a nomadic life since birth. She has lived in various European cities and Cuba, and currently resides in the Los Angeles area. Always an avid reader and writer from a young age, she loved entertaining her friends with ghost stories. She loves horror movies, cats, and a good rock show. She dislikes Mondays and chick-flicks. CUT HERE, her debut paranormal urban fantasy was inspired by a nightmare the writer had a few years ago. Some of her favourite authors include Anne Rice, Oscar Wilde, Chuck Palahniuk, and Isabella Santacroce. END_OF_DOCUMENT_TOKEN_TO_BE_REPLACED
This entry was posted on Monday, December 22nd, 2014 at 7:25 am and tagged with #behindthebook, #behindthescenes, #catania, #clivebarker, #cuthere, #darioargento, #nightmre, #smashingpumpkins, #thecure, #yanovel and posted in #behindthebook, #behindthescenes, #catania, #clivebarker, #cuthere, #darioargento, #nightmare, #smashingpumpkins, #thecure, #yanovel. You can follow any responses to this entry through the RSS 2.0 feed.
Behind, “CUT HERE,” Part Two. »